Attached are the documents retained by the Superintendent of Indian Affairs which include Petition #115, letter of support from William Morris and the Superintendent's response and letters from other government officials.

This is a copy of the original Petition for land: 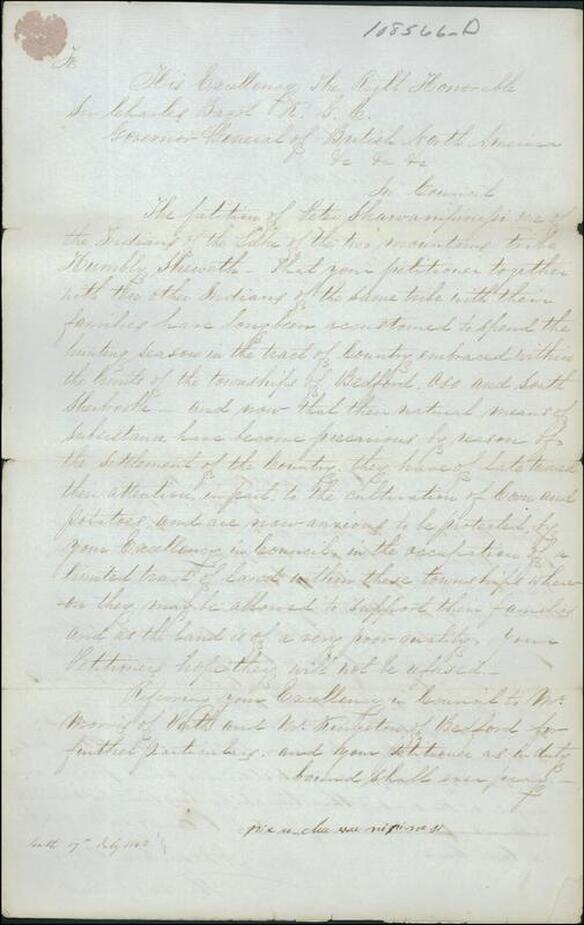 (Here is a word for word transcription)
108566-D Petition 115
To
His Excellency the Right Honourable
Sir Charles Bagot R.G.C.
Governor General of British North America
In Council
The petition of Peter Shawanipinessi one of the Indians of the Lake of the two mountains tribe Humbly Sheweth – that your petitioner together with ten other Indians of the same tribe with their families have long been accustomed to spend the hunting season in the tract of country embraced within the limits of the townships of Bedford, Oso and South Sherbrooke – and now that their natural means of subsistence has become precarious by reason of the settlement of the country, they have of late turned their attention in part, to the cultivation of corn and potatoes and are now anxious to be protected by your Excellency in Council in the occupation of a limited tract of land within these townships whereon they may be allowed to support their families.  And as the land is of a very poor quality, your petitioners hope they will not be refused.
Referring your Excellency in Council to Mr. Morris of Perth and Mr. Kingston of Bedford for further particulars and your petitioner is in duty bound shall ever pray –
Pie rr cha wi ni pi ne si
17th July 1842
Original document above is from  the National Archives of Canada, RG 10, volume 186B  Petition No. 115 1842.07.17 Peter Shawanipinessi

Here are the additional documents saved by the Superintendent of Indian Affairs: