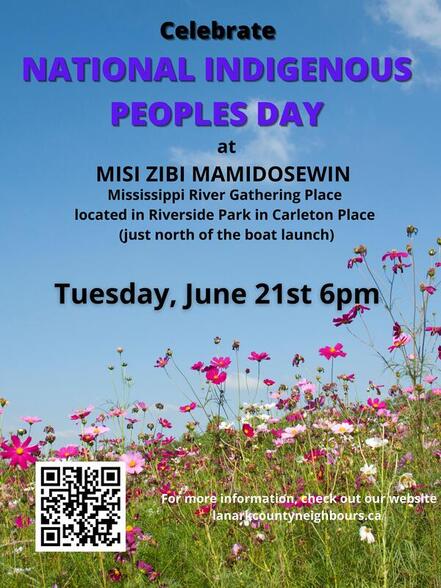 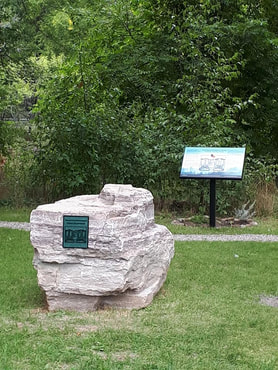 Something powerful happened on the Summer Solstice this year at the Perth Healing Forest Memorial. Grandmother Francine Desjardins led a gathering and pipe ceremony that both celebrated the Solstice and witnessed the systemic violence experienced in Canada by Indigenous and Black peoples. The event honoured Missing and Murdered Indigenous Women, Girls & Two Spirit People, and the Black Lives Matter movement. With demonstrations circling the globe in this moment against racial violence and police brutality, it was an important time to stand together in ceremonial space here in unceded Algonquin/Omàmiwininì territory to express our solidarity, commitment, and compassion.

The gathering was a full and moving experience. After her Thanksgiving address, Francine shared the Strawberry teaching, including that the Strawberry is shaped like a heart and teaches forgiveness and peace. We enjoyed the delicious Strawberries passed around the circle. Teachings were also shared by the Lanark Drum Circle, each song they played touching the heart in a different way. The pipe ceremony was modified due to the pandemic, with the two pipe carriers—Francine Desjardins and Christina Bendevis—honouring the Seven Directions (the 4 cardinal points, sky world, Mother Earth, and the spirit within) with pipe-smoke from where they sat.

Following the pipe ceremony, Francine invited a round of sharing, asking us to introduce ourselves by way of our ancestry and then to speak about what positive thing we can each do to help and support Indigenous People and Black Lives Matter in their struggle with racism. The sharings by both Indigenous people and settlers in the circle was rich and nourishing, as each spoke from their heart from their own unique position. In the middle of this ceremony, a police vehicle arrived, responding—so we were to discover—to a report that an event was being held with more than ten people. Rather than disperse us, however, the police officer accepted an invitation to be smudged into the circle, and joined in the sharing when it came to their turn.

It was wonderful to see the work of Lanark County Neighbours for Truth and Reconciliation continuing despite the pandemic. It was a day for celebration, remembrance, truth-telling, making commitments, and affirming the ongoing presence and rights of Indigenous peoples in these lands. 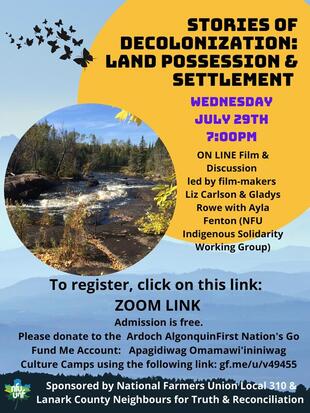 Wednesday, July 29 at 7:00pm on Zoom  a screening and discussion of the documentary film, Stories of Decolonization: Land Dispossession and Settlement. Filmmakers Teddy Zegeye-Gebrehiwot, Elizabeth (Liz) Carlson, Gladys Rowe, and Sarah Story present the narratives of Indigenous and non-Indigenous people from across Canada “who have come to understand themselves in relation to colonization and have engaged in decolonization work”. Stemming from interviews that Liz did as part of her PhD, the film is intended to showcase work being done by Indigenous activists and settlers working in allyship to understand and challenge settler colonialism in Canada, offering inspiration and examples for those hoping to learn more and challenge the visible and invisible roles of settler colonialism in their own lives.This event is open to anyone with an interest and an open heart.
We will begin with introductions, following which everyone is invited to watch the film on their own at https://www.storiesofdecolonization.org/film-one.html
Then we will reconvene for a panel discussion with the filmmakers and a question and answer period in which everyone is welcome to join.
This screening is sponsored by the National Farmers Union Local 310 and the Lanark County Neighbours for Truth and Reconciliation. The event is free; however, donations to the Ardoch Algonquin Culture Camp will be gratefully accepted at https://www.gf.me/u/v49455 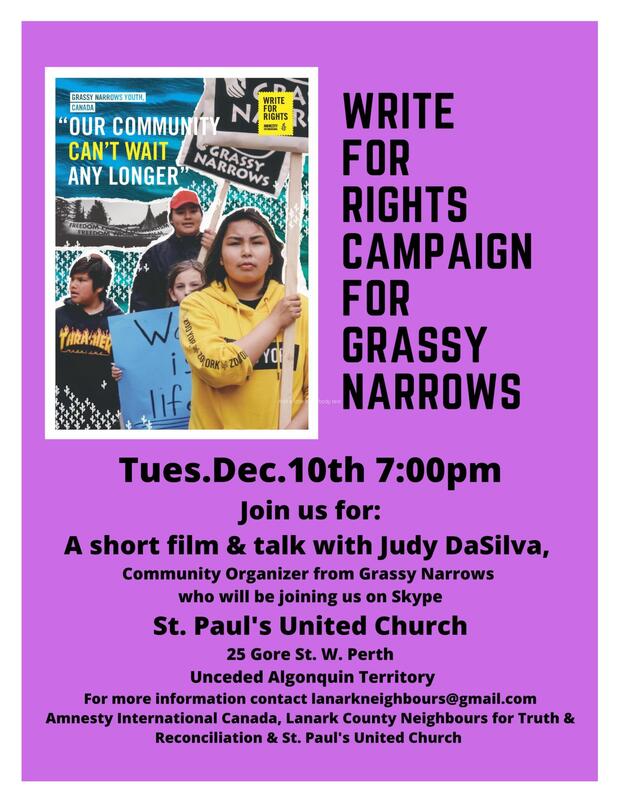 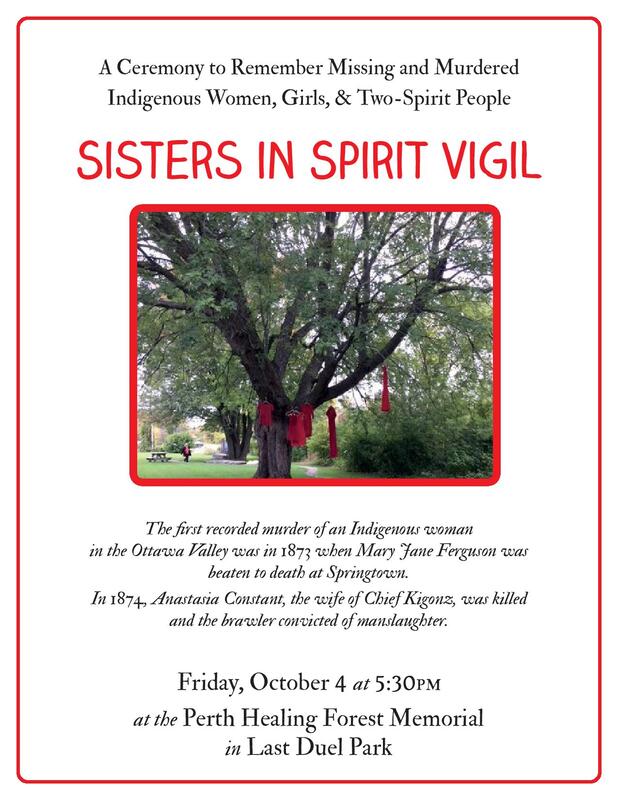 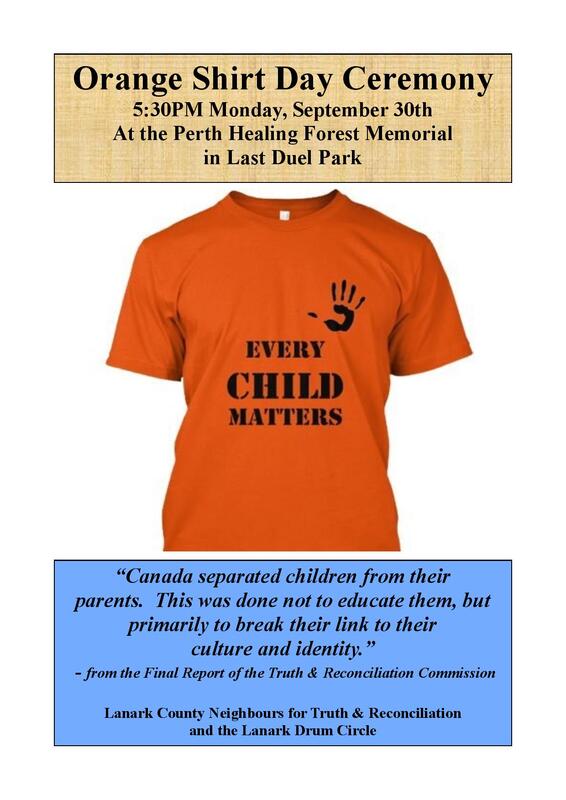 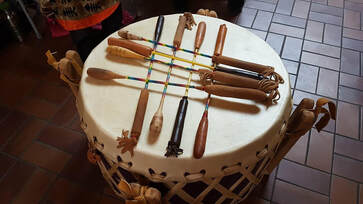 An unusual addition to the soundscape of Perth stopped many people in their tracks on Saturday as they walked down Gore Street. Those piqued by curiosity, who followed the sound – the rhythmic beat of a large drum - found themselves at the entrance to the walled garden adjacent to the Perth Museum.

Here, in this small intimate space, and seated around a beautiful big drum, eleven drummers from the Lanark Drum Circle, joined by anyone there who felt called to sit at the drum, sat together sharing songs, teachings and the ‘heartbeat of Mother Earth’ with visitors who stopped in throughout the afternoon.

To First Nations peoples the drum is a sacred object and the sounds of the drum represent the heartbeat of Mother Earth.  The songs interpreted by the Lanark Drum Circle have been passed down from the ancestors, and have travelled to the Ottawa area from many First Nations Elders, such as the Anishinaabe (Algonquin and Ojibwe), Mi’kmaq, Maliseet, and others.

It was wonderful to see the courtyard come to life with the sounds of drumming and song, the wood/brick oven fired up, bannock being rolled out, baked and served hot with blueberry sauce, and teacups with steaming cedar tea being appreciated by guests.

For some people, this was their first experience listening to traditional drumming and song. Many found the experience very powerful and moving. Other visitors spent time inside the museum creating their own dreamcatchers in two workshops (taught by Debby Lytle and Lise LeClair) and came away with a deeper understanding of what these beautiful objects symbolize. For most who attended, the afternoon was a powerful and symbolic gesture towards Reconciliation.

Three young people visiting the Perth area from Toronto - called in by the sound of drumming - each expressed with a big smile that they found the event truly welcoming and suggesting too that we need more of this sort of event - ones that provide an opportunity to learn about Indigenous cultures and help to build relationships.

Indigenous Culture Day was organized and hosted by the Lanark County Neighbours for Truth and Reconciliation (LCNTR) and the Perth Museum. 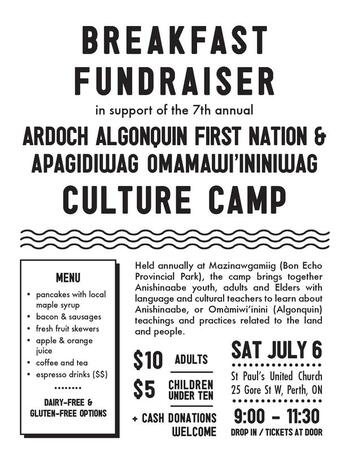 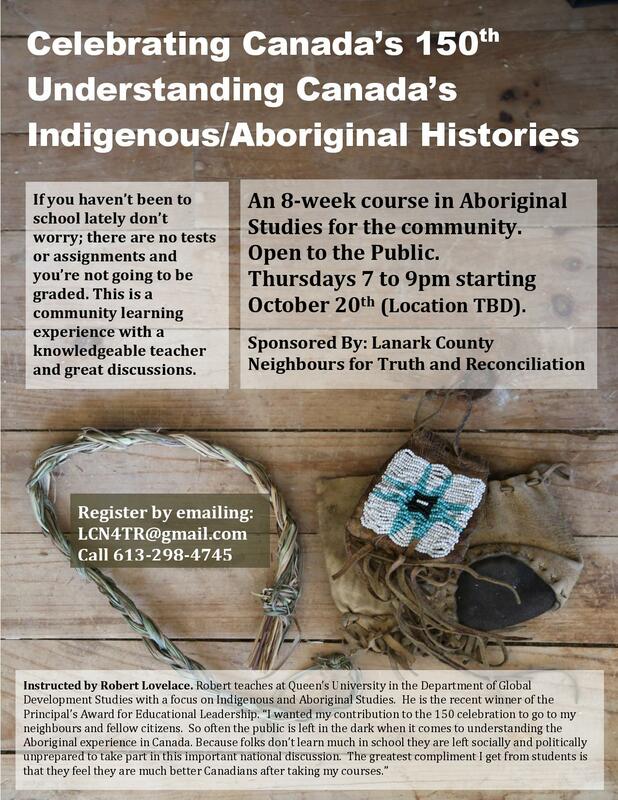 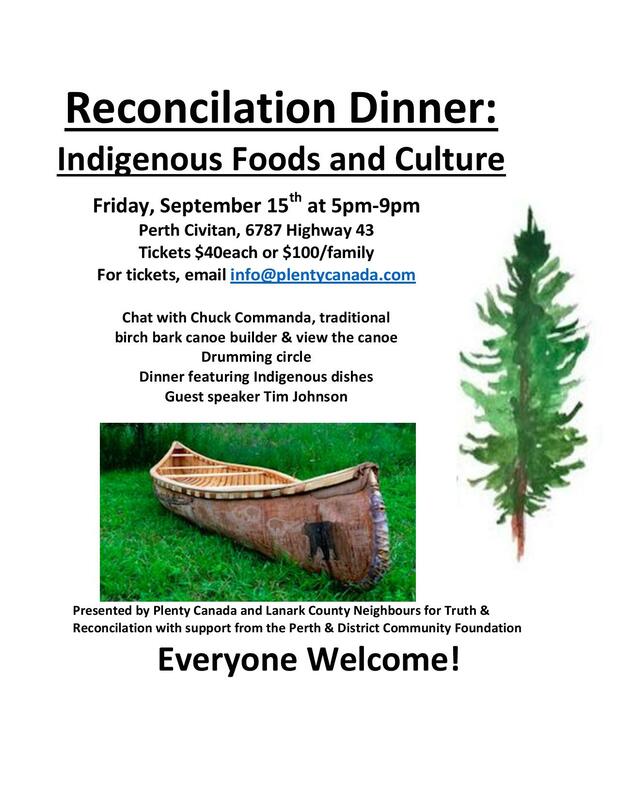 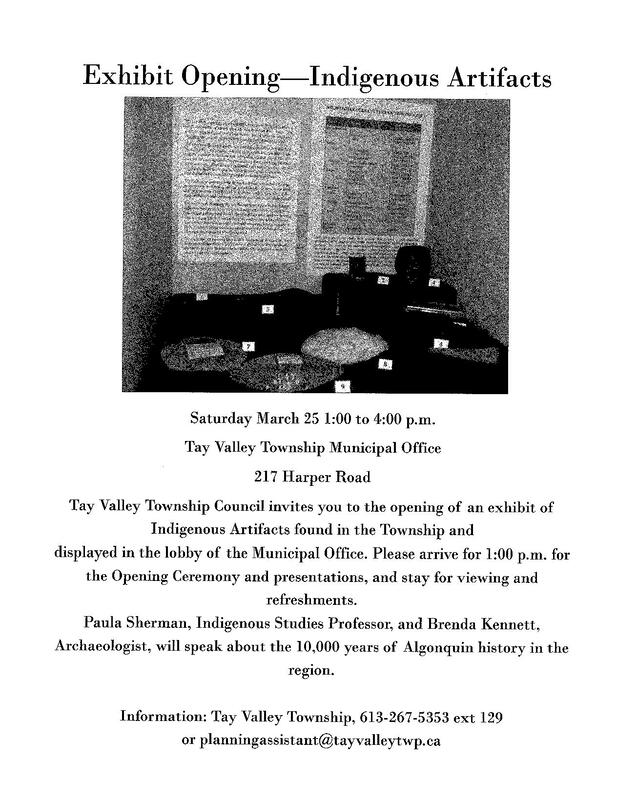 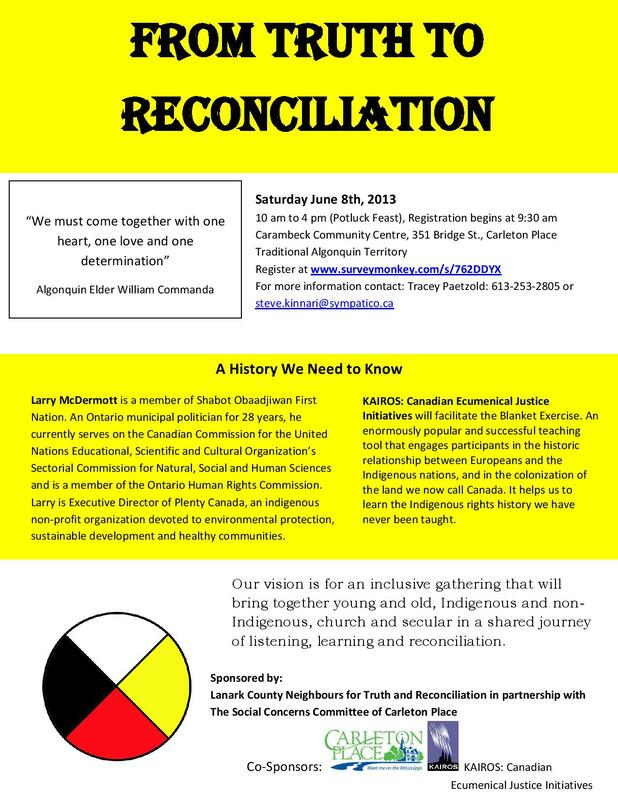 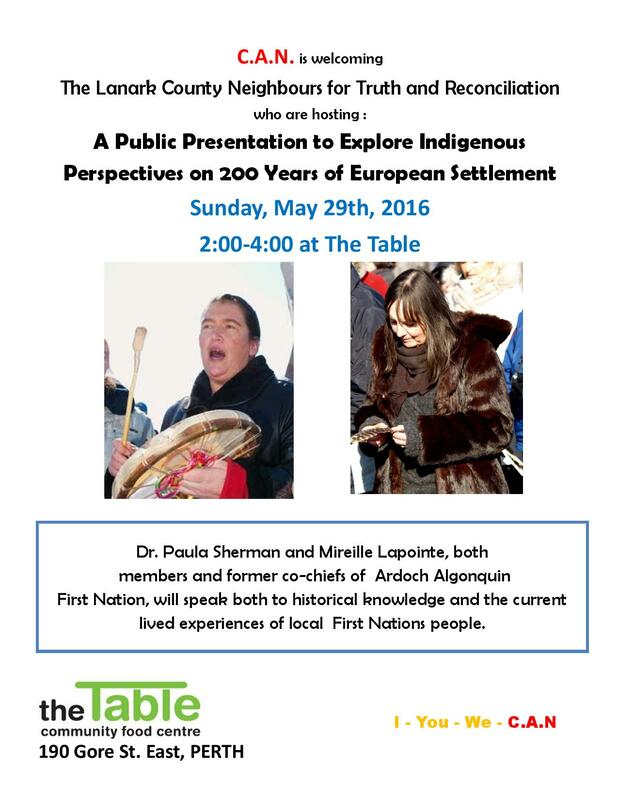 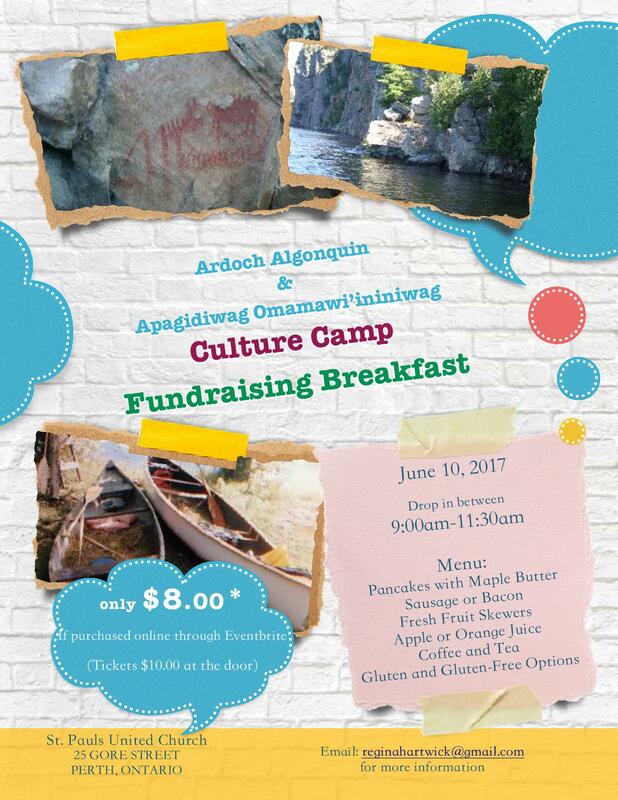