The next general meeting is planned for February 2022.  For more information please contact lanarkneighbours@gmail.com 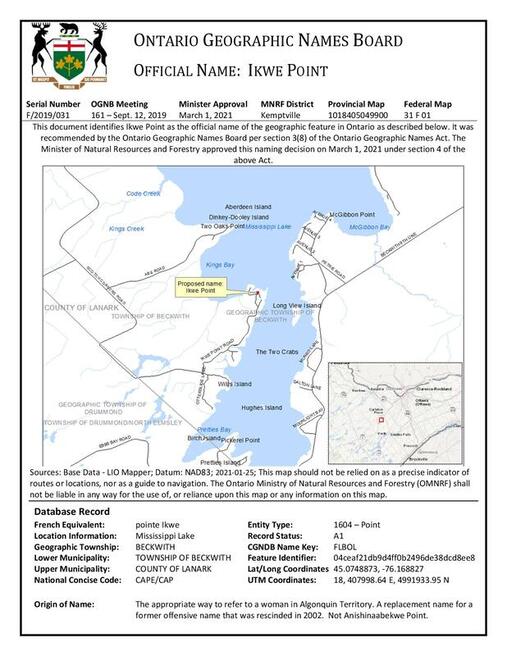 ​At their December 12th, 2020 meeting, Beckwith Township council passed a motion to change the road name to Ikwe Point Road.
The new road name is pronounced "Eekway" according to the Algonquin language dictionary at https://www.thealgonquinway.ca/
The name was a result of consensus achieved between the Algonquin people and the residents along the private road.
It is the first road bearing an Algonquin name in Lanark County and we look forward to more Algonquin road names in the future as it is a great way for municipalities to promote Reconciliation. On March 1, 2021 the Ontario Geographic Names Board approved the name: Ikwe Point.  Below is a map of the portion of Mississippi Lake where the point is found.
The Tay Basin Plaque 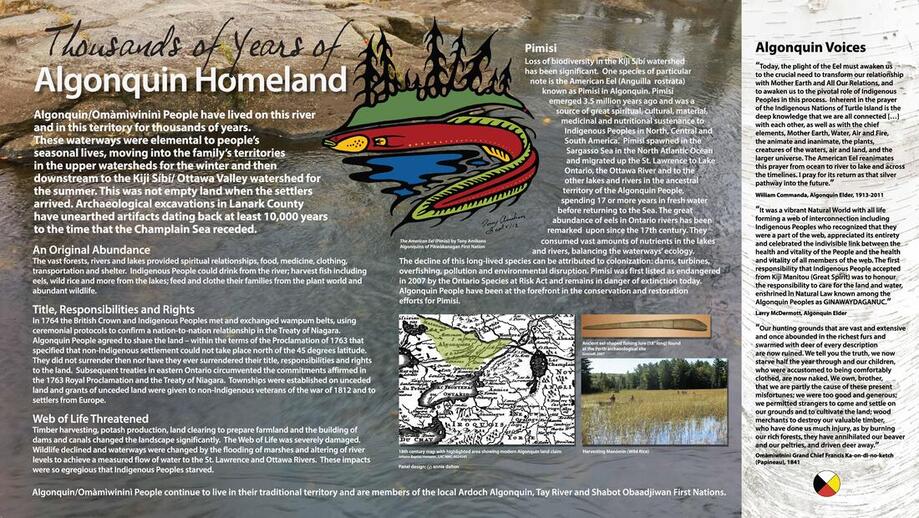 Longstanding Indigenous Presence Recognized
with Two Algonquin History Plaques
Thousands of years before European settlers arrived in what is now called Lanark County, Algonquin/Omàmìwininì People thrived in these lands. When Samuel de Champlain first encountered Algonquins in the 1600s, the land was not empty. Rather, the Algonquin People had complex social and political structures for governing their homeland. These structures worked at an individual and collective level to maintain balanced relationships within the Natural World, fulfilling the Algonquins’ responsibilities to Creation. Little of this history is known by the current non-Indigenous occupants of this territory, including the fact that the land has never been ceded or surrendered by the Algonquin People.

In an effort to recognize both this history and the ongoing presence of Algonquin communities, two plaques have just been installed in Lanark County. The creation and installation of the plaques was organized by the community volunteer group Lanark County Neighbours for Truth and Reconciliation. The Neighbours group worked in partnership with elders from the Ardoch Algonquin First Nation and the Shabot Obaadjiwan First Nation, who acted in the role of advisors.

One of these advisors, Larry McDermott of the Shabot Obaadjiwan First Nation, made the following statement. “Chi miigwetch (thank you) to the Lanark County Neighbors for Truth and Reconciliation for coordinating these efforts to bring forward voice of Algonquin ancestral legacy, animate a history that has been silenced and exemplify the way forward in cross-cultural respect for the land and water as was intended in the original wampum belts and early generosity of our Algonquin ancestors to the first settlers. Ginawaydaganuc—all of life is connected and bound by Natural Law which no human being has the power to change.”

One of the plaques is entitled “Thousands of Years of Algonquin Homeland.” It is located in the Tay Basin in Perth, near the Crystal Palace. This downtown Perth location was chosen as a high traffic area that will allow many residents and tourists to learn a different story about Lanark County and the Ottawa Valley. The large, beautifully designed plaque describes the lifeways of the Algonquin People prior to European contact, as well as the impacts of ongoing colonialism on the natural world and the Algonquin People themselves.

The other plaque, mounted on a marble boulder, is entitled “Algonquins of Bedford, Oso & South Sherbrooke.” It can be found on the south side of County Road 36, between the Crow Lake Road and Hanna Road turnoffs, just north of the community of Bolingbroke. This plaque tells the story of the Algonquin Chief Shawinipinessi’s petition in the middle of the nineteenth century to have a reserve set aside for his community. Reserves were not a traditional way of existence for Algonquin People, but Shawinipinessi made the petition because of the steady destruction of the natural world of the Algonquin homeland. Despite the Crown's approval of a reserve the land continued to be destroyed by squatters and timber merchants. The Crown then denied that a reserve had ever been granted, and Shawinipinessi’s community was forced to find other places to live.

Images of both plaques can be found on the Lanark County Neighbours website (see address below). They are definitely worth a visit in person, though, for the powerful impact they make in the open air of these ancient lands. The Tay Basin plaque was designed by the Perth area’s Annie Dalton.

Congratulations are due to the Town of Perth and to Tay Valley Township for their enthusiastic support of these two works of historical remembrance.

"We are happy to have this beautiful and informative sign installed in the heart of Perth,” stated Mayor John Fenick. “It provides valuable information about the Algonquin Nation and their way of life before the settlers arrived and continued presence in our area. I strongly encourage all Perth residents to walk through the Tay Basin and take some time to stop and enjoy the new sign and learn more about the Algonquin Nation."

Reeve Brian Campbell shared similarly positive sentiments. “Tay Valley Township is pleased to be able to contribute to local knowledge about the history of the Algonquin in our area. For too many years Algonquins have gone hidden and unrecognized in our communities in Eastern Ontario since they never had reserves established. With this plaque we hope to encourage greater awareness of the Algonquins among us today, their past struggles, and we look forward to future activities together.”

This plaque project has truly been a community exercise. In addition to the support of the two municipalities and the partnership between the Algonquin elders and the Neighbours group, it has included many financial donations and volunteer efforts. For the Bolingbroke location, for instance, Omya Canada (Tom Lalonde and Carlos Morales Velez) donated five marble boulders. Tony Sweeney of Sweeney Landscaping then did the tricky work of placing a 4-ton boulder atop another boulder. Brooke Valley’s Ian Duthie, finally, lent his time and skill to mount the plaque on this cap rock. Also working hard behind the scenes were Tay Valley planner Noelle Reeve, the Tay Valley Heritage Committee, and Tay Valley Public Works. While the installation of the plaques is an important step in the truth and reconciliation process, the high level of community commitment speaks well to an ongoing interest in the vital longer term work of historical repair.

Ceremonies led by Algonquin leaders were initially planned for the unveiling of the plaques, but these are now delayed due to the COVID-19 pandemic. Those interested in the forthcoming ceremonies and other reconciliation events can sign up for the mailing list on the Lanark County Neighbours for Truth and Reconciliation website (www.lanarkcountyneighbours.ca). The Neighbours group was established in 2012 as a local organization dedicated to implementing the Calls to Action issued in the final report of the Truth and Reconciliation Commission of Canada. The group works under the direction of local Indigenous advisors. New members are always welcome.