Understanding the Role of Manòmin in Indigenous Food Sovereignty

Thank you to the National Farmers Union for permission to reprint this article published in the Summer 2018 issue of Union Farmer Quarterly. For more information on the work of the NFU in Indigenous Solidarity please visit the website:  www.nfu.ca/about/international/indigenous-solidarity-working-group/

​Understanding The Role of Manòmin in Indigenous Food Sovereignty

My husband, Jack and I are members of Ardoch Algonquin First Nation and live on 97 acres of land near Westport, Ontario, close to where Algonquin people had requested the establishment of a reserve in 1842[1]. It is a privilege for us to have been able to buy back our own land. This area is quite special as it is part of an area called The Land In Between[2], which has particular ecology that is important to preserve. We bought the land in 2004 but the Uranium Resistance[3]  took a great deal of our time and when the resistance was finished, we built a house.

What we are trying to do is bring back wild plants.We have huge areas of wild garlic, which we are careful to protect. We have beautiful birch trees with Chaga on them and we have some maples. So we collect sweet water from both the birch and the maples for our own use. We also raise Chantecler hens, a heritage breed of chicken developed in Canada to withstand cold weather. We plant only heritage seeds and seeds of plants that Indigenous people grew. But mostly what I am trying to do is educate myself about the society of plants and why certain plants grow close to each other[4] - not necessarily about their use to human beings because they don’t all have to have a use to us. 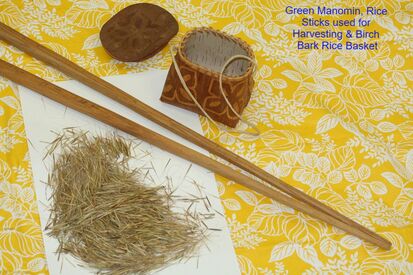 ​​Before Europeans came here, the trees were big. What we see now is regrowth and I wonder what the smells and sounds were like, the feel of the air before there were commercial spaces and the sound of electricity in the wires. What Jack and I envision is not to go back 300 years, because we can’t, but to bring back a semblance of wild where we can. By doing this I can reconnect with my sense of land and knowledge of plants that was there once upon a time but through time has been lost.

​​“Manòmin is a plant with spiritual significance that stretches back to the Creation of Anishinaabe people and the Great Migration. During that time our ancestors were told to continue until they saw this plant growing on the water. As a result Anishinaabe people settled all over the Great Lakes and developed relationships over thousands of years.” (www.aafna.ca)
Manòmin to me was a rice that you buy at the store. I knew that it grew in lakes but I never harvested the rice when I was growing up. My dad was more of a hunter and a fisherman.  I was very fortunate to help with the Uranium Resistance, and because of that I was introduced to Manòmin and to the harvesting of Manòmin in Ardoch. It has become a priority in my life to protect Manòmin, and ensure that Ardoch’s Manòmin beds are protected from commercial exploitation – Not because I object to commercial ventures, but because there is a very specific need for the Manòmin here to help people remember how to harvest and process wild rice themselves – to get people to rethink on their responsibility for their own food. For me food sovereignty means reconnecting with the food source. 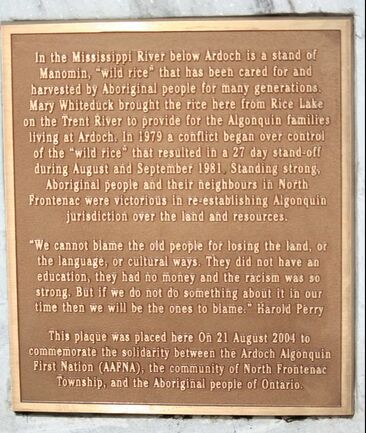 Wild rice is a vulnerable plant as it grows in shallow lakes or slow-moving streams.  There is a danger of extinction due to loss of habitat, as speedboats can quickly destroy a stand of wild rice. Pollution from recreational cottages and boats can change the ecology of streams and lakes. Manipulation of the water level can wipe out the stand. Experimental genetic engineering of wild rice threatens the integrity of the wild species[5]. The attitude of recreational users who want the lakes to be free of “weeds” has resulted in conflict[6]. And, in the early 1980s, conflict came about from the failure of the Ontario government to understand and respect the longstanding historical relationship between Algonquin people and the Manòmin stands at Ardoch.[7]

Mud Lake was first seeded to Manòmin in the 1800s. “At that time the forests were being clear-cut and burned and Algonquin families were struggling to survive because of the thick black smoke that was all around. Animals had fled and traditional subsistence plants were not able to sustain growth because of the smoke. Learning of the struggle, relatives at Alderville First Nation sent Manòmin seeds, which were planted in the lake by the Whiteduck family. The seeds grew into three beds of Manòmin, which Ardoch families have cared for ever since.”[8]  (www.aafna.com)

In the fall of 1979 the Ontario Ministry of Natural Resources gave Lanark Wild Rice a permit to harvest the Ardoch stand at Mud Lake. After an extended court challenge, Mary Whiteduck’s descendent Harold Perry was able to stop the harvest in 1980. In 1981 a new permit was issued for commercial harvest. Twenty seven days of resistance followed and the commercial harvest was successfully prevented. The victory was achieved by Ardoch Algonquin First Nation, with the help of Indigenous allies and family from Alderville, Tyendinaga, Curve Lake and Hiawatha as well as non-Indigenous neighbours and the co-operation of township officials.

A monument stands today at the bridge in Ardoch where the resistance took place. It recognizes the jurisdiction of Ardoch Algonquin First Nation in this unceded Algonquin Territory, and acknowledges the solidarity that was achieved in protecting Manòmin from commercialization.  We are forever vigilant in this role, understanding that our responsibility to our relatives is a part of our original instructions.

Mireille LaPointe NFU 316 with Maureen Bostock
April 15, 2018
​Footnotes
[1] The petition by Shawanapinessi was successful and a reserve was established, but the government refused to protect the community from violence and destruction of the forests by loggers, and ultimately denied that a permit for a reserve had been given.
[2] Land Between is a large transition zone which lies at the intersection of the Canadian Shield and the St. Lawrence Lowlands. See www.couchichingconserv.ca, The Land Between: Where the North and South Converge.
[3] The uranium resistance at Robertsville, near Ardoch ON began on June 29, 2007. Ardoch Algonquin First Nation and Shabot Obaadjiwan First Nation set up a blockade to stop Frontenac Ventures from staking claims with the intention of developing a uranium mine. See www.turtleisland.org/discussion/viewtopic.php?p=8500, Tehaliwaskenhas.
[4] See creatorsgarden.blogspot.ca/
[5] https://www.iatp.org/sites/default/files/Wild_Rice__Maps_Genes_and_Patents.doc by Winona La Duke, 2001 identifies US Patent 5955.648 which describes the experimentation with cytoplasmic genetic male sterility to improve commercial productivity of wild rice.
[6] https://www.redmanlaughing.com/listen/2017/5/red-man-laughing-the-wild-rice-wars  Interview with James Whetung from Curve Lake First Nation who details the actions of cottagers in opposition to wild rice seeding of Pigeon Lake.
[7] Manomin (Wild Rice) in the Kiji Sibi (Ottawa River) Valley: An Exploration of Traditional Food, Development & Decolonization by Geri Blinick Carleton University M.A. Geography 2012
[8] www.aafna.ca  Ardoch Algonquin First Nation & Allies website details the history of Manòmin and the Wild Rice War of 1979